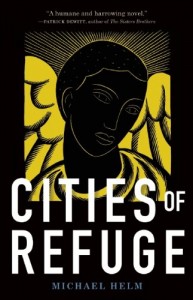 A young woman is attacked on her way home from work, her assailant dragging her into a construction site and attempting to rape her in the shadow of the cranes. She fights him off, but she is scarred by the attack, both mentally and physically. In the following months she struggles to reconcile her life with the events of that night.

So begins Michael Helm’s Cities of Refuge, telling the kind of story that we’re used to hearing on nightly news broadcasts. The history of urban living is riddled with such tragedies. Many authors would have turned this beginning into a work of crime fiction or emotional drama, but Helm’s approach is drier and more theoretical. The young woman in question, Kim Lystrander, works for a charity aiding refugees whose appeals have been rejected, and her father becomes convinced that this was no random act of violence. His investigations, and Kim’s mental wrangling, open up questions on the nature of compassion and the extent of one person’s complicity in acts of national atrocity. Her father’s own past seems to hold a secret guilt, and as Kim comes to realise, “It wasn’t just that he’d remade himself, or repudiated his origins… part of his remaking involved forgetting his past.” It’s this examination of guilt and memory in the face of violent acts that becomes the novel’s main focus.

The resulting tone will undoubtedly run a little too dry for some readers. After the initial violence this quickly becomes a novel of contemplation and theory rather than action, as the characters mull over events and talk themselves into intellectual tangles. Those who are expecting a conventional crime narrative will be disappointed. Much of the novel’s middle section is slow and meandering, and when the plot finally returns, a hundred pages from the end, it seems unlikely and overworked. The reader becomes so used to Helm’s philosophical tone that almost any narrative conclusion would have felt forced.

What carries much of the novel, however, is the author’s beautiful control of language and his ability to craft immaculate sentences, and admirers of technical achievement will find much to love. One of his recurring themes is the numbing depersonalisation of city living, and the picture he paints of downtown Toronto could apply equally to New York, London, or any modern metropolis. He tells us, “Cities aren’t buildings, they’re traffic. They’re selected eye contact and the compassing alarms at night and what they set off, the scurrying, the looping guesses at haunch-weights.” The violence Kim suffers is symptomatic of this urban malaise, a random act that is as impersonal as the city that spawns it.

It’s her father, Harold, who tries to read more meaning into the assault, and it’s his story that gradually comes to dominate the book. He has experienced an act of genocide while in South America, and he tries to understand the attack in these terms. By investigating his daughter’s assailant he is working through issues from his own past. Both Kim and her father have been scarred by violent events, but they choose to deal with them in different ways. Harold is an academic and he wants to find definitive answers, to be able to point the finger of blame and arrive at absolute truth. Kim, in comparison, is more compassionate and empathetic. It’s her attempt to understand her father that hints at what Helm himself is hoping to accomplish with this examination of violence. “Writing in his voice, she understood that Harold was someone else from the inside. In the time it took to truly imagine her father, to inhabit him, language and thought, the anger gave way to something like forgiveness.”

Cities of Refuge is a tough book to read, with a theorizing tone that many readers will find dry and obstructive. By delving into the deeper resonances of its events, Helm’s novel often sounds more like a work of moral philosophy or social anthropology than a piece of narrative fiction. But his mastery of language is impressive from start to finish, and the pervasiveness of his themes – the impersonal nature of modern cities, the long-lasting damage caused by acts of violence, the question of complicity in acts of genocide – is enough to pull the meandering narrative together into a cohesive whole. As Helm himself writes, “Fiction, no matter its scope, will always fail history.” While his novel doesn’t always succeed, it distinguishes itself by offering an intelligent, poetic examination of the seams of violence that run through modern life. By reading it, and engaging with the questions at its core, we come closer to understanding, to empathising, and to “something like forgiveness”.

0 replies on “BOOK REVIEW: Cities of Refuge by Michael Helm”