Welcome to another installment of If My Book, the Monkeybicycle feature in which authors shed light on their recently released books by comparing them to weird things. This week Steve Himmer writes about Scratch, his latest novel, out now from Dark House Press/Curbside Splendor. 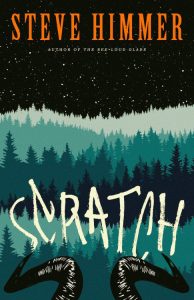 If Scratch were a bird it would nest in the rafters of the home improvement store where you shop, bedding down in shredded coconut husk from the gardening section and torn-up receipts dropped on your way to the car. It would perch atop gas grills and lawn furniture chained up outside after a visit to neighbors who nest in the curves of letters spelling the store’s name on its exterior walls, in wait for some larger creature like you to trigger the automatic door sensors.

If Scratch were a squirrel it would be in your walls. You’d turn up your TV as loud as you dare but still know it was there. The unending scuttle of claws and the whisper of insulation and wires shunted aside would creep into your ears and into your sleep, when you were able to get some, until you could no longer tell whether you were hearing the actual squirrel or its memory.

If Scratch were mice it would be many of them, pouring from under the antique credenza to graze on the carpet beneath your dining room table. You’d see them in the sleepless small hours of reruns subtitled by the passage of time, and you’d try so hard not to notice but would know they were there gnawing holes in your life.

If Scratch were a dog it would creep out after dark. Its forepaws would push on a front window screen until it gave way, leaving your house unguarded and open to whatever might come while the watchdog’s away. It would wait beneath high power lines where they carve through the woods, in a pack with all the other dogs in your neighborhood who also snuck out, tussling and howling and passing the time until a bird hit the wires, bursting with blue flame and bright sparks, and where it fell the whole pack would pounce. The dog would come home before dawn with blood on its muzzle and its stain would be lost in the fabric of your living room sofa before you awoke.

If Scratch were a fox it would be hardly glimpsed, a flash of orange at the edge of the manicured park as you push your child not too high on the swing over the relative soft landing of wood chips; maybe you see it, maybe you don’t, but you’ll wonder for the rest of the day and the better part of the night.

If Scratch were a fisher it would be the shriek, mistaken for the unmistakable howl of a suffering child, and you’d leap from bed crashing into the dresser in your dash to the other bedroom to check on the baby who is sleeping soundly and still. And the next day online you’d find a recording of that horrible sound and an image of the creature you did not know existed never mind in your yard, and you’d play it again and again at your desk, volume low, leaning close to the speaker, because you’ve never heard anything sound so much like horror before.

If Scratch were a coyote it would stand half in and half out of the trees at the edge of the parking lot of your favorite restaurant where you’d regret asking the waitress for a table on the patio instead of indoors.

If Scratch were a bear it would be all the bears, real bears and stuffed toys, friendly bears and man-eaters, bear husbands and bear brides and bear changelings swapped for your babies. It would be in your garage rifling barrels of trash when you got home from work and on the live video of your house when you’re miles away and get an alert something has triggered the camera. You would bump into it rounding a corner while looking down at the screen of your phone, and a surveillance camera somewhere would capture the moment to be laughed at forever on other screens on other phones. It would be outside your tent and inside your dumpster and crossing the playing field at every school so every child everywhere is held inside after the bell. It would be Ursuses major and minor, always overhead, and always in your head, too, because if you’ve seen a bear once that bear is always with you, around the next corner or in the next room or in the bushes you’re certain just shook.

Steve Himmer is the author of the novels Scratch, Fram, and The Bee-Loud Glade. He edits the webjournal Necessary Fiction and can be found at SteveHimmer.com and

0 replies on “IF MY BOOK: Scratch, Steve Himmer”