Welcome to another installment of If My Book, the Monkeybicycle feature in which authors shed light on their recently released books by comparing them to weird things. This week Kali VanBaale writes about her latest novel, The Space Between, out now from MG Press. 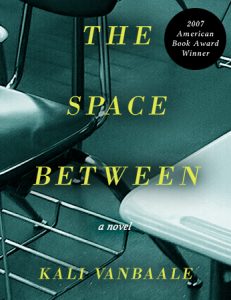 If The Space Between had a memory, it would remember that on April 20, 1999, I was six months pregnant and watching news footage of the shootings at Columbine High School. It would remember that my initial thoughts weren’t about the parents of the victims, but of the parents of the shooters, of what would become of their families, and that I suddenly pictured a woman—a mother—racing to a school, fearing her son might be a victim, never imagining he’s the assailant.

My book would remember that I wrote the opening line by hand in a spiral notebook while sitting in a booth at a Perkins restaurant one cold January night with my newborn son sleeping in his car seat next to me.

It would remember that I scribbled a single line of dialogue on the back of a grocery store receipt at one point while sitting at a stop sign in my car, and that the line would eventually become an entire chapter and crack open the biggest emotional themes of the story: blame and guilt.

It would remember that I started labeling the computer files of the chapters by descriptive titles, like “Procession” and “Thereafter” and “Peppermint Questions,” because I wrote the book out of order and needed aids to keep them straight, but that once I put the book together in sequence, I’d grown to like the descriptive chapter titles and kept them. My book would also remember my later conclusion that writing a novel out of order is a terrible idea.

It would remember that while revising the six or seventh draft, I painted the words of Michelangelo, I saw the angel in the marble and carved until I set him free, on my office wall where I could see them as I worked, and that I vowed to keep revising the book until I knew I had set Judith Elliot free.

It would remember that I edited the final draft of this story about a marriage and family disintegrating, while on an airplane to and from a visit with my sister in Arizona, a visit during which it became painfully clear that my sister’s marriage was disintegrating.

And finally, if my first book had a memory, it would remember that, like my firstborn child, it suffered all of my new parent mistakes because I didn’t always know what I was doing. And yet, despite my woeful inexperience, my firstborn and my first book still managed to make their way in the world, each with forgiving memories.

Kali VanBaale is the author of the novels The Good Divide and The Space Between. She is the recipient of an American Book Award, an Eric Hoffer Book Award, an Independent Publisher’s silver medal for fiction, and a State of Iowa major artist grant. Her short stories and essays have appeared in The Chaffey Review, Midwestern Gothic, Numéro Cinq, Nowhere Magazine, The Milo Review, Northwind Literary, Poets&Writers, The Writer, and several anthologies. Kali holds an MFA in creative writing from Vermont College of Fine Arts and is a faculty member of the Lindenwood University MFA Creative Writing Program. She lives outside Des Moines with her family. Find her on Twitter at @kalivanbaale.

0 replies on “IF MY BOOK: The Space Between, Kali VanBaale”