Welcome to another installment of If My Book, the Monkeybicycle feature in which authors shed light on their recently released books by comparing them to weird things. This week Margo Littell writes about Each Vagabond by Name, out now from University of New Orleans Press. 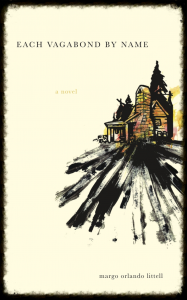 If Each Vagabond by Name were an activity on a summer Saturday, it would be a large rubber raft carried in the back of a pickup down to the river on the west side of town, where it would be inflated with a beat-up air compressor, dragged into the water, and filled with a handful of friends and a Styrofoam cooler of IC Light.

If Each Vagabond by Name were comfort food, it’d be meatloaf, cooked for too long in an old Pyrex casserole dish so the grease caramelizes at the edges, served with instant mashed potatoes and gravy from a jar. And it’d be cooking when you get home from somewhere cold and dark, where you’ve eaten nothing but a peanut butter sandwich all day, and when you take the first bite—meat and potatoes and gravy together on the fork—it’s the best thing you’ve ever tasted.

If Each Vagabond by Name were a scare, it’d be a middle-of-the-night phone call that wasn’t actually a death or other sadness but only a drunk college kid dialing the wrong number. And even though you can hear the party in the background—music and shouting and a peal of laughter—while the kid says Jared? Fuck. Sorry, man—and he’s already talking to someone else as he hangs up, your heart is still pounding because it’s three a.m., and when you were asleep you didn’t feel as alone as you do right now, the phone quiet in your hand.

If Each Vagabond by Name were a house, it’d be an aluminum-sided two-story home in a nice small town where a long-married couple raises their family and then stays for the rest of their lives. It has thirty-year-old wall-to-wall carpeting, fraying upholstery, and a knockoff Thomas Kincaid. The kids who grow up in that house count the days until they can move away. Twenty years later, they wish they hadn’t left.

If Each Vagabond by Name were a vehicle, it’d be a beat-up pickup with duct-taped vinyl seats. But it has a kick-ass heater and chains on the tires and it’s the one pulling the neighbors’ wimpy sedans out of snow drifts all winter long.

If Each Vagabond by Name were a book club, it’d meet at the local bar and talk about hunting instead of books.

Margo Orlando Littell is a writer from southwestern Pennsylvania who now lives in New Jersey, where she collects card catalogs and oil portraits of strangers. She has an MFA from Columbia University. Each Vagabond by Name, her first novel, won the University of New Orleans Publishing Lab Prize. Find out more at margoorlandolittell.com or follow her on Twitter at @margolittell.

0 replies on “IF MY BOOK: Margo Littell”