Welcome to another installment of If My Book, the Monkeybicycle feature in which authors shed light on their recently released books by comparing them to weird things. This week Kevin Catalano writes about his debut novel, Where the Sun Shines Out, available now from Skyhorse Publishing. 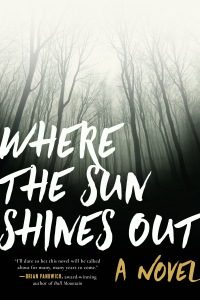 If Where the Sun Shines Out were someone you were seated next to on an airplane, he would stink like booze and weed, but would not take your armrest; he would not talk to you while you read your book, except to say excuse me when reaching for the tomato juice and pretzels that the flight attendant handed out; when asleep, my book, if a passenger, would have nightmares and make the kind of terrible whimpering noises that compel you to consider waking him, but he would never lean his head on your shoulder; when the plane would begin its descent, this passenger would offer you a stick of gum, and when you smiled and accepted the offering, you’d realize he had given you the last piece, but it would be too late to do anything other than put the gum in your mouth and chew until your ears popped; and when the plane landed, he would not immediately stand to get his overhead bag and thus clog the aisle, but would instead text someone and wait for a reply, and wait, and still be waiting even when nearly everyone had exited the plane, until this passenger began to weep into the window, trying very hard to be private about it so as not to embarrass you, and he would remain that way until it was your turn to exit.

If you were Where the Sun Shines Out, you would want to console this passenger, want to invite him for a drink at the airport bar even though it was only 11 AM, because while you didn’t know him, he seemed familiar to you, and while you ultimately said nothing, which you’d regret the entire day because you’d suddenly see this moment as if it were a scene in a film, and you were pleading with yourself, the character, to do something for this passenger in need, you reached into the overhead compartment to remove his scuffed duffel bag and placed it into the seat you had been sitting in and lingered a helpless moment, searching yourself for the courage to do more, which you didn’t find.

If Where the Sun Shines Out were an airplane, it would be bringing these two passengers to their hometown, a place they were both returning to for the first time since they were teenagers, when they attended the same high school, had the same homeroom, spoke briefly to each other only once because they were in different cliques, and that was about comic books and whether the other had read A Death in the Family, and after agreeing it was great, the conversation died awkwardly. None of the passengers would be aware that after 30,000 flights, this airplane was officially decommissioned and was now on its way to the boneyard where it would be harvested for parts, but not until the final passenger, still weeping, had left the plane, which he had yet to do, despite the attendant’s pleading.

And if Where the Sun Shines Out were a book, it would have been left behind in the pocket of the seat along with the airline magazine and barf bag and piece of gum wadded up in a napkin, and this was where it would have remained had the final passenger not desperately shoved his hands into the pocket searching for the barf bag and instead finding this book, which seemed like something he might enjoy, after, that is, he got sick, pulled himself together, and finally exited the plane to visit, hopefully for the last time, the place of his birth.

Kevin Catalano is the author of Where the Sun Shines Out (Skyhorse). His stories have appeared in PANK, storySouth, Gargoyle Magazine, Monkeybicycle, People Holding, and other places. He teaches at Rutgers University-Newark and lives with his wife and children in New Jersey. Find out more at kevincatalano.com or follow him on Twitter @KevinMCatalano.

0 replies on “IF MY BOOK: Where the Sun Shines Out by Kevin Catalano”