Welcome to another installment of If My Book, the Monkeybicycle feature in which authors shed light on their recently released books by comparing them to weird things. This week Matthew Neill Null writes about Allegheny Front, his new story collection just published by Sarabande Books.. 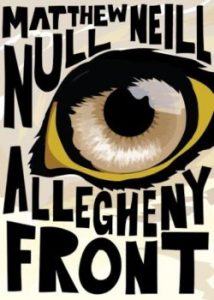 If Allegheny Front were a fight, it would be Gabriel García Márquez versus a pack of nine dogs and he would come out of it like a man who has been attacked by nine dogs. (The dogs are realism.)

If Allegheny Front were a politician, it would be Governor Arch Moore Jr., who plead guilty to five felonies, including the extortion of $573,000 from a coal company and the obstruction of the subsequent investigation, and spent a couple years in federal volleyball prison. His daughter, Shelley Moore Capito, is now our sitting junior Senator.

If Allegheny Front were a book of jokes, every page would be about farmers and their sheep—or sheep and their farmers, depending on where you place us in the hierarchy. It would be jarringly bookmarked with a copy of The Upper Room, the Methodist devotional.

If Allegheny Front were a state, it would obviously be West Virginia, but with southwest Pennsylvania and extreme western Maryland and Bath County, Virginia, too, consumed into us in fact as they are in spirit.

If Allegheny Front were an inheritance, you would open the safety deposit box to find a newspaper from V-E Day, a tintype of a female relative you cannot identify, and a promising, musty envelope that turns out to contain a single blank sheet of letterhead from the bank in which you stand. The door closes behind you. You cannot escape.

If Allegheny Front were a page from Frank Stanford, it would read, “Horses fuck inside me and a river makes a bend in my shoulder.”

If Allegheny Front were a song, it must be “Abernant 1984/85.” After failure you live or you die. They are the same. Rhondda Cynon Taf. Names that cannot be forgotten. But are anyway.

Matthew Neill Null is a writer from West Virginia, a graduate of the Iowa Writers’ Workshop, and a winner of the O. Henry Award, the Mary McCarthy Prize, and the Joseph Brodsky Rome Prize from the American Academy of Arts and Letters. He is author of the novel Honey from the Lion (Lookout Books) and the story collection Allegheny Front (Sarabande). Next year he’ll be in residence at the American Academy in Rome. Find out more at matthewneillnull.com.