Welcome to another installment of If My Book, the Monkeybicycle feature in which authors shed light on their recently released books by comparing them to weird things. This week Olivia Clare writes about Disasters in the First World, her debut story collection published by Grove Atlantic. 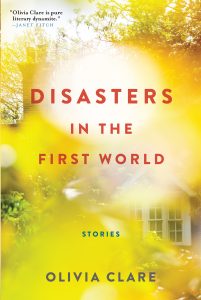 If Disasters in the First World were a house, you would encounter it while walking, your walk taking you into fog and clusters of trees, blurry to you at their very tops.

If my book were a sight on an isolate path, it’d be flora unknown to us. Sprigs and flowering of a color you can’t identify. Or one you’ve seen only once—when the eye doctor took his instrument straight to your eyes and flipped your lids up.

If Disasters in the First World were a sound on that path, it would be the sound of talking. The distant threat of it. The knocking. The insistence of itself upon itself. You cannot make out the words.

If my book were a feeling, it would be the worry that comes to you upon hearing this talking. The worry you are found and found out. You might need to sleep, right where you are, so you get no closer.

If my book were sleep, it would wake hourly, recounting the middle of the dream before it could recount the start of it, and wondering if someone slept beside it, because it could not remember its present waking life, wondering if that mattered.

And every time it woke it would look for a thing to do to occupy itself. The laundry, the vacuuming, a bath.

If my book were a book, that would be a very strange thing.

Olivia Clare is the author of a short story collection, Disasters in the First World, from Black Cat/Grove Atlantic. She is also the author of a book of poems, The 26-Hour Day (New Issues, 2015). Her fiction has appeared in Granta, n+1, Boston Review, Southern Review, and The O. Henry Prize Stories 2014, among other publications. Her poems have appeared in Poetry, Southern Review, London Magazine, FIELD, and elsewhere. She holds master’s degrees from the Iowa Writers’ Workshop and the University of Southern California, as well as a PhD from the University of Nevada. She is an Assistant Professor in Creative Writing at Sam Houston State University. Find out more at Olivia-clare.com, or follow her on Twitter at @olivia_clare_.