Welcome to another installment of If My Book, the Monkeybicycle feature in which authors shed light on their recently released books by comparing them to weird things. This week Brian Oliu writes about i/o, his memoir recently published by Civil Coping Mechanisms. 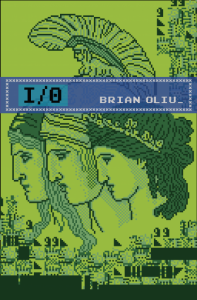 If i/o were a fast food item, it would be the five piece spicy tender combo from Popeyes because aesthetically it has a lot of zags and crags, with no tender universal and the same. You, the reader, would be the dipping sauce—you would transform the book to what you desire it to be through the book’s immersion. The book by itself is a beautiful & delicious thing on its own, but the book with you could be anything.

If i/o were a current WWE professional wrestler, it would be Curtis Axel. A book entrenched in history and truth, striving to be flawless, yet failing miserably along the way, though every single attempt is well-documented & appreciated. At times the book becomes self-aware, but even then we are uncertain if the book is in on the joke: that somehow in its attempts to be something else, it becomes a blank slate of nothingness, which, in a way, makes it bizarre and more than perfect.

If i/o were a Madden defensive play call, it would be Engage Eight: a swarm of madness that risks everything in hopes of achieving a result that, if we are being honest with ourselves, is far too much to ask. It is desperate. It is hoping that amongst the chaos there is a pattern.

If i/o were one of my track jackets, it would be the Puma Fluid Light Tech jacket—simultaneously neon & incredibly dark, with a lightweight material that swooshes & makes constant noise with every movement.

Brian Oliu is originally from New Jersey and currently lives in Tuscaloosa, Alabama. He is the author of two chapbooks and four full-length collections, So You Know It’s Me (Tiny Hardcore Press, 2011), a series of Craigslist Missed Connections, Leave Luck to Heaven (Uncanny Valley Press, 2014), an ode to 8-bit video games, Enter Your Initials For Record Keeping (Cobalt Press, 2015), essays on NBA Jam, and i/o (Civil Coping Mechanisms, 2015), a memoir in the form of a computer virus. He is at work on a memoir about translating his grandfather’s book on long distance running. Follow him on Twitter at @beoliu or at brianoliu.com.