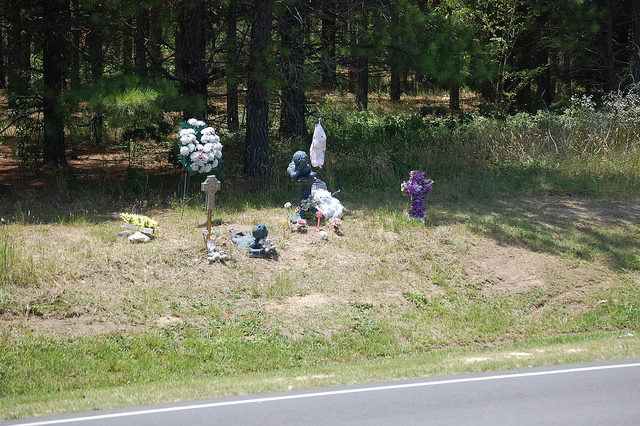 I watched a woman fix a roadside shrine just before the rain came.

Blue and purple plastic flowers thinned by summer sun and bent weird by winter. Coat hangers built into a cross. Nailed into a swamp oak. Ya know.

We was parked in my car on the overpass and just watching.

Nothing to do. Flicking the air freshener of the nude fire fighter. Me and Cindy do that sometimes. Park there. She tells me anecdotes. I flick the firefighter’s balls.

You can see the most desperate parts of this town from up there.

Cindy is a French inhaler, smoking her cigarette slow, exhale out the mouth and suck back in the nose. Pretend to be the cancerous tide to all in a wide arc from this perch, baby. And as she rests, following a laugh and starts to tell me about one of her many many customers, I’m forced to lean over and shush her.

“Look at this, the mother, I’m assuming the mother, look at her, very motherly, she’s painting a message on the tree. A warning.”

We watch enthralled as each letter is formed out with big picket fence fan size brush, and Tom Sawyer white wash and the message says:

“She spelled her own daughter’s name wrong.”

“Think she was hit by a car or you think she overdosed on yellow jackets?”

“Car crashed through the shrine the other day. Heard it on the police scanner. Amazing how many wrecks happen here. This is like the car crash center of the universe.”

“What a special thing to say about our town.”

The woman packs her paints away in her station wagon because the rain has started and it was such an odd time to paint, right? There goes the letters running down the tree, white streaks. As the car leaves I see it has decals in the window with the daughter’s birthday year through her death year. She was just seventeen. Her name was spelled right on the back window.

I pop a ginger ale and pour it in both our coffee mugs, hers saying I’m A Winner, mine plain pink. Cindy dumps in some bourbon. She even has a bag of popcorn. We can’t afford the movies, but at this part of the curve there’s often a free show, often.

“I feel bad,” she says, “how excited I get about seeing something horrible happen. Does that make me a lousy person?”

“Nope.” I take a drink from the cup and swish the ginger ale and liquor around violently in my mouth so I can feel the sharp pains in my teeth where the holes are. It’s like hide and go seek.

“Hey, what’s the nicest thing you ever did for anybody?”

“Well remember when I said I was a night guard on Terrabond Street Bridge when I was studying to do the nurse thing that fell through?”

“This one night there was this guy who stopped his car and he walked out to the sidewalk and climbed over the little railing and I yelled for him just before I guess he was gonna jump. But he didn’t jump because of some BS I said. You remember this story?”

“Partly. Did you tell him there was sharks in the river?”

“No, I said he would survive the fall. I said he’d most likely just break his legs or pelvis and wouldn’t drown. That he’d just be hurt. Hurt so bad. Make his situation worse.”

“He did not. All because I told him, well more like sold him on the idea of a better death bridge I’d gone over with Walter when he was still alive. Costa Rica and there was crocodiles or alligators at the bottom of the bridge and it was a high fall and me and Walter threw chicken pieces off the bridge and the crocs went crazy. The jumper seemed real impressed by this far off bridge.”

“That was real sweet. So the guy went to Costa Rica and killed himself?”

“Nah, I see him around sometime. But he put on some weight.”

I looked over at Cindy and she looked completely neutral. She was the most neutral life form on earth. She was not coming or going. She was not building up or tearing apart. The smoke came out of her lips and circled back through her nose, in and out, an infinity symbol with no eye make up or college degree. Me, I’m mostly a division symbol.

I flick the firefighter right in his face. Anybody who calls themselves a hero or believes they are one is lost.

Bud Smith is the author of the novels F 250 and I’m From Electric Peak (forthcoming March 2016). His writing has been at Hobart, Wigleaf, The Rumpus, Smokelong, among others. He works heavy construction in New Jersey and lives in NYC with his wife, a textile artist. Find him on the web at www.budsmithwrites.com, and on Twitter at @Bud_Smith.