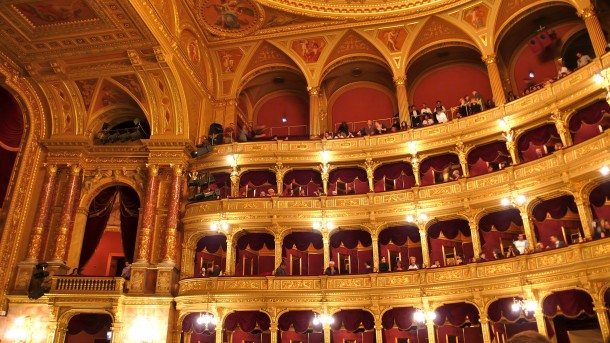 . . . took out the Sacher torts and replaced them with chocolate cream cakes, but if you’re blind in one eye—and between you and I, most of this crowd is at least that blind—you’d order it anyway, thinking it was the genuine Viennese article. That’s the general trend these days, the turn for the worse moves so slowly and imperceptibly, like the rotation of the Earth beneath your feet, that you might wonder if it was happening at all, or actually mistake it for improvement. And only the astronomers can tell you for certain whether things are turning in fact, and if so, in which direction . . .

A little bell rang out, and all heads swiveled upward to the balcony loft, eyes wide with expectation, hands clasped eagerly under chins. Velvet curtains parted, and a line of opera stars appeared above the audience gathered in the vestibule. The soprano threw glitter, the bass forced a tolerant smile, the tenor whispered something piquant into the alto’s jewel-studded ear, and she in turn laughed extravagantly and blew condescending kisses to the crowd. Everybody knows that an opera-singer’s laugh is the very epitome of falsehood; everybody knows that when the tenor weeps, it is only for himself, that his tears do not extend so far as the front row of the audience; but the crowd roars with feverish admiration all the same.

. . . might have read in the papers, by the way, that they have apprehended that strangler. Well, I don’t know what they are going to do with him, but it’s become another occasion for this culture to show off its perversity. Because have you noticed that women have suddenly begun baring their necks? I mean actually strutting around, calling attention to them. It’s become just another way of being provocative, they are using the strangler to show their . . .

I know precisely the one you mean, yes, a horrible business. Yes, it’s no different.

A short and debonair Hungarian had wheeled an enormous cage into the center of the vestibule floor; in the cage was a massive gorilla, reputedly the most powerful of all animals. The Hungarian was boasting that a creature so brutal as this had never before walked the earth. For a small fee you could poke it between the ribs with the sharp end of a stick. The monster howled with pain and rage; women huddled themselves up close to their husbands or lovers in mock or genuine terror. A double-jointed woman in a revealing cocktail dress drew a small crowd by twisting her arms in improbable ways. Some musicians began improvising a jazzy rendition of “Hymn for the Wounded Soldier.” The chandeliers were lowered, the light was dimmed. People lit cigarettes and their conversations grew more intimate.

. . . shall never forget it, he simply said to me: Our ship has run aground, and then he up and left, as though this was a fit conclusion to our twenty-eight years of marriage, and I longed to tell him that what is beautiful in the cinema might well be an atrocity in real life, and vice versa . . . And when the screen couple falls in love, they’re on the beach and she loses her helium balloon, then he goes to retrieve it, chasing it into the setting sun, this simply does not mean that in reality…

Focusing our gaze on the face of the woman, we see that she is shedding the odd tear. She waits until they fall halfway down her porcelain cheeks and then wipes them away with a practiced flick of the hand.

The man standing opposite her is an aging seducer. No longer capable of relying on his dashing good looks (his neck is flabby; little black hairs sprout in clumps from his ears; his fingers are oddly disfigured) he must count on the texture of his voice (velvet) and an unorthodox strategy: he makes women cry. Although the psychology is a bit obscure, even to his own mind, he cannot deny the empirical facts—a woman in tears seldom finds it in her heart to brush away the roving hand, seldom refuses to be escorted home. He reaches over and pets her shoulder.

Standing not far away, his hand clutching a glass of rum, his restless gaze following the men sipping cognac by the gargoyle-head fountain, was Len, the retired championship wrestler. His body rippled under his suit, his face was so disfigured that one could never be entirely certain when Len was pleased, and when he was furious – these were his prevailing moods. Len intuited shortly before the eclipse of his career that there were two kinds of retired wrestlers: those who were feared and those who were mocked. Unable to bear the thought of the latter, Len developed a hair-trigger temper, mastered the lightning transition from conviviality to fearsome rage, and—much to his own surprise—found himself a frequent guest at the most exclusive invitation-only galas. At first the senators and songstresses had all gathered round him as a new animate attraction, but soon everyone lost interest or became frightened of his sudden and meaningless outbursts, and now for some time Len had been accustomed to drinking alone – though the invitations continued unabated. On this night, however, he felt a strange disgust welling inside of him, and because he had no one in particular to aim it at, it remained a stifled inward feeling, an acidic juice that fizzed in his stomach.

All of a sudden he was pushing his way through the crowd, walking a straight line and bowling down whatever got in its path. It soon became clear to observers that he was making for the Hungarian animal trainer, removing his dinner jacket and shirt and flexing his muscles en route. The lights had by now dimmed so far that only people’s silhouettes were visible; they trembled about as though beheld by candlelight. But when the retired wrestling champion was a mere breath from the animal trainer, both of their faces had an uncanny illumination, as though for the benefit of some cinema audience watching it all on an enormous screen.

Soren A. Gauger is a Canadian writer and translator who has lived for over a decade in Krakow, Poland. He has published two books of short fiction, Hymns to Millionaires (Twisted Spoon Press) and Quatre Regards sur l’Enfant Jesus (Ravenna Press), and translations of Polish writers, Jerzy Ficowski, Bruno Jasienski and Wojciech Jagielski. His essays, stories, poems, and translations have appeared in journals in Europe and North America, including the Chicago Review, The Southern Review, Capilano Review, Contrary, Asymptote, Cossack, American Book Review, and Words Without Borders. His first novel, Neither/Nor, will be published in October in Polish by Ha!Art Publishers.