Welcome to another installment of If My Book, the Monkeybicycle feature in which authors shed light on their recently released books by comparing them to weird things. This week Robert F. Delaney writes about his debut novel, The Wounded Muse, published by Mosaic Press. 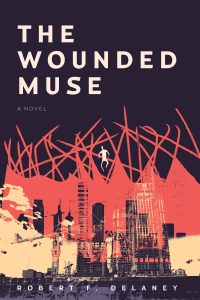 If The Wounded Muse were one of 10 albums from each of the past five decades, you could choose any of the ones listed below. A book that explores urban transformation, authoritarian censorship, international espionage, and raunchy gay sex needs as a musical analog albums written by oddball groups that make incongruity a central theme. And because these albums were often playing in the background while the book was written, some of the ideas and imagery bled into the story.

Eat to the Beat by Blondie, (1979)
Blondie never had any fucks to give about what record companies expected of them. And this album explores dislocation and alienation against urban and industrial settings.

Green by REM (1987)
Another group that made it big with unusual combinations of subjects and sounds.

1990s
Balls Under the Red Flag by Cui Jian, (1994)
Thinly veiled subversion by a Mainland Chinese artist that could also be read as appreciation.

Impossible to Miss You by Wang Leehom, (1999)
A mix of grungy guitars and infectious melodies. The perfect bridge between American and Chinese pop.

2000s
“Green Album” by Weezer, (2001)
Rivers Cuomo sometimes sounds like he’s dying of desperation even though many of the songs are as uplifting as the Beach Boys’ Good Vibrations.

Confessions on a Dance Floor by Madonna, (2005)
The album wraps the listener in a kaleidoscope of sensory overload that’s as irresistible as Shanghai’s fast-evolving Pudong skyline or Beijing’s Jianguo Road.

2010s
The Suburbs by Arcade Fire (2010)
Strained relationships against a backdrop where “dead shopping malls rise like mountains beyond mountains, and there’s no end in sight”.

Robert Delaney has been covering China as a journalist for Dow Jones Newswires, Bloomberg News, and South China Morning Post since 1995. Many of the themes for The Wounded Muse, Robert’s first novel, were first developed in Route 1 to China, a collection of short stories that won Robert “First Runner Up” in the University of Toronto – Penguin Random House Creative Writing Competition in 2012. Find him on Twitter at @rdfelaney.